DISCOVER THE WONDERS OF SPACE AND NATURE AT PARI. 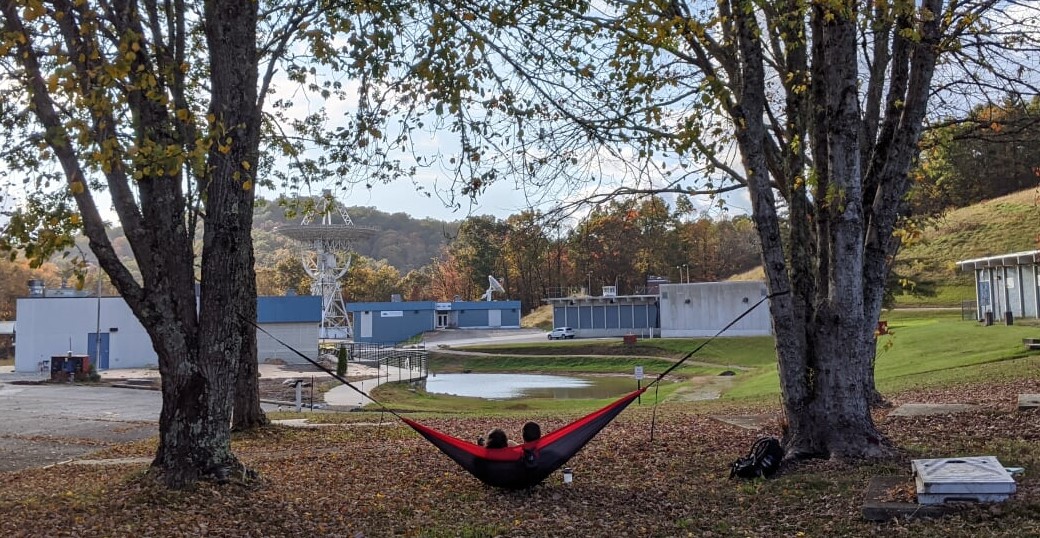 PARI welcomes guests of all ages to immerse themselves in science, space, and nature at our remote, 200+ acre campus nestled in the mountains of the Pisgah National Forest.

Our historic facility with impressive optical and radio telescopes draw both curious travelers and esteemed scientists from around the world. With the Pisgah National Forest in our backyard, PARI is the perfect addition for those visiting the area to enjoy outdoor adventures like hiking, fishing, river rafting and exploring our many surrounding waterfalls. PARI’s ridge-top views provide a unique vantage point to experience seasonal bursts of color and lush foliage. PARI is an internationally certified DARK SKY PARK, one of only two in North Carolina, providing nights filled with brilliant stars, flashes of meteors, and the Milky Way stretching from horizon to horizon.

Guided tours of our
facility and campus for guests from K to gray.

Educational curriculum, tours, and presentations
for educators and their students.

Visit our NASA exhibit and collection of meteorites, gems, and minerals in our on-site galleries.

Give the gift of PARI or take home a special memory with an item from the PARI Shop.

VISIT OUR SHOP
Complete your visit with a look at what our neighbors have to offer! 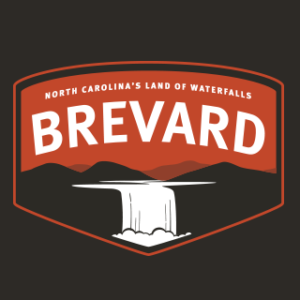 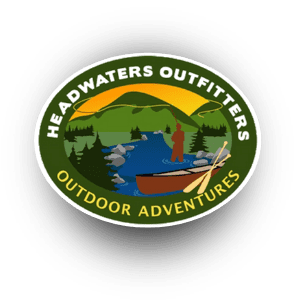 THE MOON CLOSELY FOLLOWS THE ECLIPTIC

The planets: Mars remains the only planet visible to the naked eye in the evening sky. As the earth circles the sun, we are moving away from the more slowly moving red planet. Thus, Mars is fading although still obvious. Tonight, it stands above the Hyades cluster and between the long horns of Taurus the bull. On the evening of the 16th the waxing crescent moon will be just to the west of Mars; the next evening it will shine on the other side of Mars having passed it during our daytime.

Jupiter and Saturn remain in the predawn sky now in the constellation of Capricornus, the sea-goat. They are rising earlier each morning and, thus, are more readily visible in the approaching dawn.

Celestial Observing Challenge: Following new moon on the 11th, we will see a thin crescent low in the west after sunset on the 13th. It is standing above the evening twilight in the constellation of Aries the ram. The next night it will be below the Pleiades cluster just entering Taurus the bull. On the 15th our moon will have moved to the west of the Hyades cluster and Aldebaran, the fierce red eye of the bull. Three nights later, it will be east of Mars and in the middle of Gemini the twins. These are all zodiac constellations, a special band around the sky in which follows the ecliptic, the plane of the solar system. The moon’s orbit is tilted just over six degrees from the ecliptic. So, if you continue your observations of the moon from night to night, you will trace out the constellations of Cancer the crab, Leo the lion and Virgo the maiden. By that time, the moon will be rising shortly after sunset. After full moon, the waning moon will be rising later in the night as it traces out the remaining constellations of the zodiac in the pre-dawn skies.

The stars: Early evening in April catches us between the prominent constellations of the receding winter skies and those of the quickly rising spring skies. In the former, the great hunter Orion can still be seen in the west. But now, as the sky darkens, he is leaning downward as he follows the bull Taurus towards the horizon. The Gemini twins, Castor and Pollux, stand to the north of their mentor as they follow him across the sky. Two bright stars, Castor and Pollux, mark their heads. Following these folks as the sky turns are the two dogs. The Dog Star Sirius, the brightest star in the nighttime sky, is in the southwest. Above Sirius is the lesser or little dog consisting of only two naked eye stars, Procyon, sometimes called “the pup” and the much dimmer Gomiesa.

Meanwhile, to the east, we find the springtime constellations becoming more apparent. Leo the lion is standing high in the east. The front or western portion of the lion has traditionally been called “the sickle” and can be found labeled as such on many star charts. It consists of an almost complete circle of stars with the bright star Regulus lying below it. In more modern times, we view this pattern as a coat hanger or a backward question mark with Regulus as the dot below the question mark.

Between the twins and the lion is Cancer the crab, basically an open area without any bright stars. However, in the middle of Cancer is a pretty cluster of stars popularly known as Praesepe or the “Beehive Cluster” since, with a pair of binoculars or a small telescope, it looks like a swarm of celestial bees. To the astronomer this cluster, named Praesepe, is known as M44 for Messier 44. Since the Beehive lies in the zodiac, it is often occulted, i.e., covered up, by the moon. The planets also appear to pass through this swarm of bees as they pass in front of Praesepe. 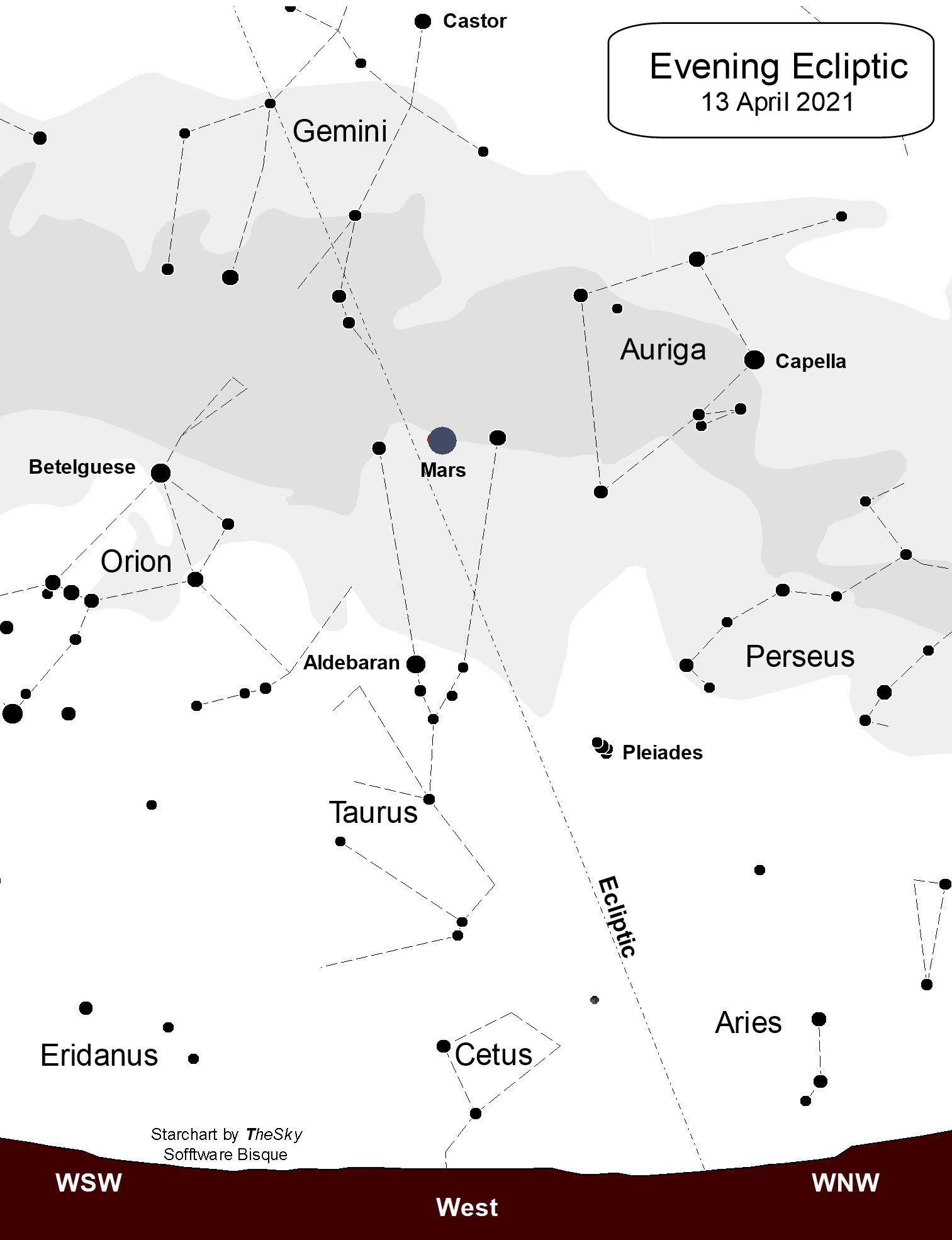 The Sun:  The first day of spring is marked by the vernal or spring equinox, the moment in time when the sun, in its apparent path around the sky, crosses the celestial equator on its way north for the spring and summer.  This year the equinox occurs at 5:37 a.m. EDT, Saturday, March 20.

The stars:  While the bright stars of winter continue to dominate the southern sky in the early evening, turn around and look to the north, specifically the northeast.  Here, low in the sky, we find the familiar pattern of the Big Dipper.  It is still not late enough in the year to see it high in the north, but we can see it rising, standing on its handle with the bowl opening to the left.  Watch the Big Dipper over the next several weeks as it gets higher and higher in the northeast until, with the coming of spring, it will lie high in the north.  Realize, of course, that the Big Dipper is not an official constellation as defined by the International Astronomical Union.  Astronomers would call it an asterism, a pattern of stars that is recognizable but not one of the 88 official constellations.  Where we see the familiar dipper, the ancient Greeks saw the long tail of the Great Bear, Ursa Major.

Celestial Observing Challenge:  Look at Mizar, the middle star in the handle of the Big Dipper.  How many stars do you see?  If you see two stars, you have passed what may have been an eye test of the ancients.  Astronomers would say you have “split” the double star.  The companion is known a Alcor.  The pair is sometimes called the “horse and rider” double.  In other traditions Alcor is said to be a hunting dog who accompanies his master Mizar following the great bear across the sky.  You can’t see it but later studies with advanced instruments have shown that Mizar and Alcor are very close double stars in they own rights.  Not only that but the two stars that make up Mizar are also doubles.  So, you are looking at a sextuplet star system.  Congratulations!

PARI is committed to the safety of our guests during COVID-19.  Please contact us to make an appointment prior to your visit.